Hal's Party - a really good party for a spectacular human being - check it out! Or you can go back to my ego-driven webpage 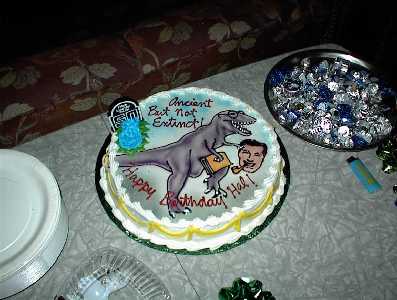 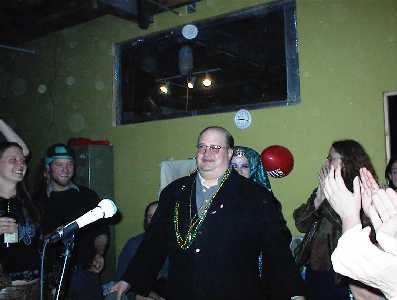 Hal was very surprised - Johnny fed him some line about taking him to a dinner theater, all his other friends were mysteriously busy that night.... Hal's a humble guy and I think the adoration overwhelmed him a little. Ok, it overwhelmed him a lot. 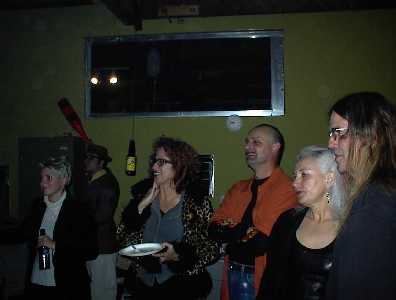 Lots of people showed up - from the various circles that Hal travels in. He should know that lots of people think he's spiffy. Credit goes to John Rinaldi (shown holding the Chicken John Fan Club) for putting it all together, for lying mercilessly to Hal (especially when the invite accidentally went to Hal's email account), and for being a generous soul to his friend. Having a party in one's bedroom is pretty big sacrifice, lemme tell ya. 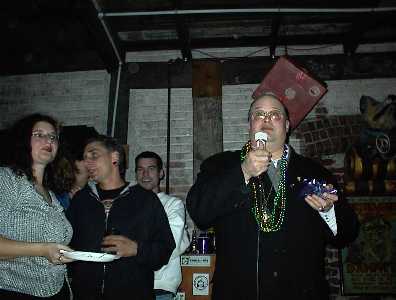 Hal and the two Molitovs. Hal's holding the gift DannyGirl gave him. There was a funny situation around a gift he received - a 17th century vietnamese porcelin trinket that had been misplaced many moons before - I can't remember how or why that came about, but I was standing next to him when he opened it and started pontificating on the origins of what looked like a sage green pill holder. Recovered from a shipwreck... from the Boing Dynasty or something. Hal got lots of Dino stuff he has no room for. Perhaps a donation to the Academy of Sciences would be in order. 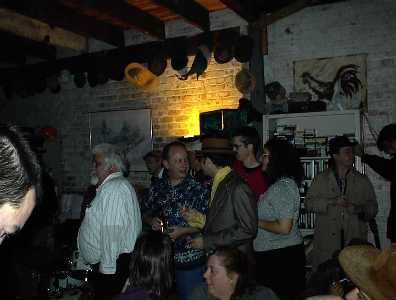 Hal's friends. A very motley assortment of artists, undergrounders, and indigent idiots like myself. I've known Hal since I was 15... I remember one night hanging out at KPFA at 2am (post punk rock show) and my dad didn't show up - so when they were done being freaks on the radio - Hal and Doug took me to breakfast. That Hal! Not only is he a great artist - but he's kind to teens! Funny too! 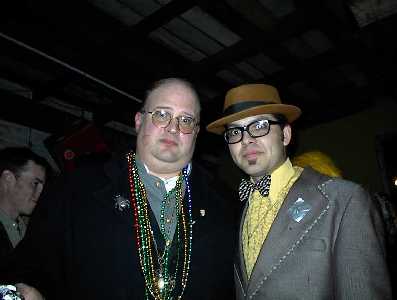 Hal and John. I couldn't think of two funnier people - and so very different. But what a team. Someone should hand over the keys to the city to these two... or at least give them a trillion dollars. Hal could educate the masses with his brilliant train-of-thought lectures and Johnny could grab them as they walked out of the classroom and tell them to stop thinking so much and allow chaos to provide. We'd have a world full of spontaneous brainiacs! 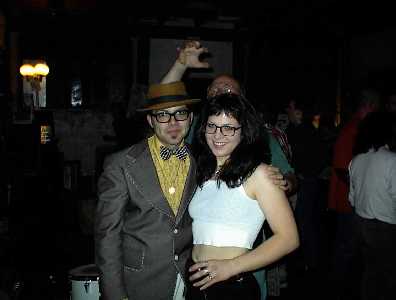 Johnny and I, with my dad lurking behind us. John has always been one of my all time favorite human beings. Some things will never change.

Harry Robins will turn 50 November 28th, and we are throwing him a suprise party. I have told him some bullshit about me taking him to a dinner theatre, and I'll pick him up at 9:00, however, I've forgotten the tickets at my house and have to return to get them. Once at my house with him waiting in the car, I'll come out and insist he help me find them, as my room is a mess and we're in a terrible hurry. he'll come in and then my house will be full of idiots. After that, it's up to you.
Don't park in the lot next to my house or my insane neighbors will slash your tires, tehn have your car towed, all within moments. The door will be open, If you can't be there by 9:00, because your lame, you have to wait until 9:30. Tuff.
Bring booze.
Ifr you don't like ciggerette smoke, bring a paddle fan.
Don't bring your dog.
Bring any cool people you deem reasonable.
Don't post this to another list, especially the Burning Man list.
There is talk of making Rev. Hal masks, so if you would like to wear a fedora hat and a long coat, with a mask you will look like Rev. Hal. John Laws' idea, we'll see if it happens, John's a little buzy lately... Jehrico is spinning at the Hush-Hush later that night with his Harmanica Comvergence thing, so after cake and drinks we may go over there. IT's 13 blocks away, about a 20 minute walk through the lovely mission, parking is easier in my hood then over there. I've set up the porn-e-okie in my room...
and now, for those of you who don't know, a little backround on Rev. Hal...
Harry Robins was born in Tuscum Arizona, Has a brother about the same age who is striking alike to Hal, wich is almost unnerving. hal is a grafix designer, but not like you think. You see, Hal actually uses a pen, to make art that is. He has a computer, but has no idea how to use it. He draws comics for a living, and a meger but happy existance has he. He designs letterhead, and then draws it with a pen. Novel, huh? He design and draws posters for shows, he draws the covers of books. He is a freak aobut dinosaurs, he loves anything Dino. Give him a few cocktails and let him ramble on for hours about the pelasauraus age or the giant wak-a dak-u beast or what ever the fuck. His mind is like an encylopedia of literature and science. He is from a place in time you can not find anymore: he is kind and respectfull, and full of charity. Hal is a good guy who is almost out of place in this society full of commerce and greed. It's amazing how he interfaces with the world, he should just receive an annuity from the state for being Hal.
So if you wanted to get him a gift, it was suggested that a gift certificate from Rainbow groceries would be a good one, or some art supplies, like paper or "pen and ink" stuff. But you don't have to get him anything if you don't want, just a suggenstion 'cause a few asked. He will be very suprised and this particular birthday (50) is supposed to be a big one.
I ahve intentionaly left all the recepiants of this mailing in the cc feild, if I've forgotten anyone or if I just don't have their e-mail please foward to persons in the Hal fold...
see ya................................ chicken john